LLC Gruppa Prodovolstvie became the winner of the contest “Exporter of the Year of the Altai Territory” for large enterprises in 2021.

Within the framework of the national project “International Cooperation and Export”, an award ceremony was held for the winners and prize-winners of the first regional stage of the competition “Exporter of the Year of the Altai Territory” for large enterprises following the results of 2021.
In the nomination “Exporter of the Year in the Agro-Industrial Complex”, the first place was taken by LLC “Gruppa Prodovolstvie”, the second place went to LLC “Bochkarevsky Brewery”, in third place – LLC “VelKen”.
LLC Gruppa Prodovolstvie exports lentils, grains, cereals, provides elevator services in the Altai and Krasnoyarsk Territories, carries out wholesale trade in agricultural products in Russia and exports to 25 countries: UAE, Azerbaijan, Libya, Mongolia, Iran, Turkey, Czech Republic , Poland, Lithuania, Georgia, Uzbekistan, Tajikistan, Turkmenistan, Kazakhstan, Lebanon, China, etc. At the end of 2021, the volume of products exported by the company increased by 165%.
The winners and prize-winners of the competition were awarded diplomas and valuable prizes.
In the future, the nominees can represent the Altai Territory in the district and federal stages of the Exporter of the Year competition.
The organizers of the competition are KAU “Altai Center for Investment and Development” together with the Ministry of Economic Development of the Altai Territory with the support of the Ministry of Industry and Energy of the Altai Territory, the Altai Territory Department for Food, Processing, Pharmaceutical Industry and Biotechnology, the Department of the Administration of the Governor and the Government of the Altai Territory for External Relations and protocol. The event is held with the aim of developing the export of non-commodity non-energy goods, works, services and results of intellectual activity, stimulating and increasing export-oriented production, strengthening international cooperation. 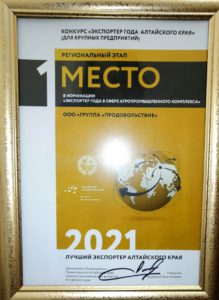 The Chamber of Commerce and Industry of the Russian Federation celebrated the 30th anniversary of its foundation on October 19, 2021.

A solemn business reception was held in the Altai Chamber of  Commerce  and  Industry  dedicated  to this anniversary, on December... read more

In the second half of August 2021, the representatives of “Gruppa Prodovolstvie” LLC visited the Republic of Kyrgyzstan in order to expand the presence of Altai products in the Kyrgyzstan market.

According to the specialists of "Gruppa Prodovolstvie" LLC, such visits give an opportunity to present their export opportunities, expand and... read more

The first quantities of Altai region red lentil were shipped to Hungary, Turkey and Bulgaria

The Altai Territory, which ranks the first among the most environmentally friendly places in Russia, is the leader in terms... read more